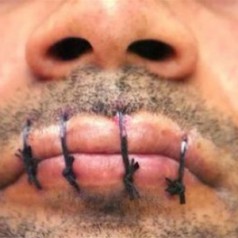 In Kyrgyzstan, more than 400 inmates to protest sewed their mouths. It is reported by AKI, with reference to the Ombudsman of the Republic Tursunbek Acuna. Thus, according to the Commissioner for Human Rights, they express their protest against the actions of security forces detention center in the Bishkek-1, which has recently been severely suppressed by the disorder.

This action mainly takes place in the prison-1 (in this case, the agency notes that it is talking about the prisoners and not the defendants). They sewed their mouths a 385. In addition, a small number of prisoners have supported this action in the colonies of number 3 (in the village of Novo-Pokrovka) and No. 5 (in the village of Petrovka). Also, according to the 24.kg, took part in the rally a small group of inmates of the colony number 47 in Bishkek.

In the Kyrgyz prisons and prison hunger strike continues. According to the Ombudsman, in jail, one in particular, contained 1371 people – of which food will only accept 259.

As previously reported, on January 16 in prison, a riot took place. The discontent of the inhabitants of the detention facility called search, organized by the administration. According to another version, which launched in the Civil service of Corrections Kyrgyzstan, there was a riot in protest against the impending crime boss escorting Damir Saparbekova (Saparbekovu recently was convicted on charges of extortion, he received three years in prison in connection with this was organized by his translation of the jail-1).

To quell the unrest in the detention center had been sent special forces. According to the Ombudsman, prison inmates were severely beaten. One of them, the defendant Nurbek Alymbaev died (as reported by the Commissioner for Human Rights, he died due to injuries). In GSIN, in turn, said that Alymbaev died from drug poisoning.

In solidarity with a jail-number of colonies began a hunger strike. Shortly thereafter, in GSIN said that the hunger strike ended. However, later it became known that the action continues. At the same time one of the requirements of hungry people, as reported, was to restore in jail, a so-called open chamber for the crime bosses. Previously, according to AKI, multiple cameras, which contained Polozhentsev is not closed: the inhabitants were free to travel throughout the facility.

Head GSIN Sheishenbek Baizakov stated that this requirement will not be performed. They want, as before, to go on the floors, 'load' of prisoners, mock staff. This will not! Even if all pozashivayut mouths! – He said.

Earlier, as reported K-News, Baizakov said that, if necessary, to feed the starving prisoners are forced to.

In Kyrgyzstan prisons are often acts of disobedience. In 2008 the colonies, a series of riots, during which two officers were killed by security forces. After that, have lost their jobs and the Chief Minister of Justice GSIN.