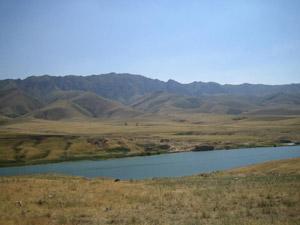 Soviet power was initially established in the region in 1919 and the Kara-Kyrgyz Autonomous Oblast was created within the Russian SFSR (the term Kara-Kirghiz was used until the mid-1920s by the Russians to distinguish them from the Kazakhs, who were also referred to as Kirghiz). On December 5, 1936, the Kyrgyz Soviet Socialist Republic was established as a full republic of the Soviet Union.

During the 1920s, Kyrgyzstan developed considerably in cultural, educational, and social life. Literacy was greatly improved, and a standard literary language was introduced. Economic and social development also was notable. Many aspects of the Kyrgyz national culture were retained despite the suppression of nationalist activity under Stalin, and, therefore, tensions with the all-Union authorities were constant.

The early years of glasnost had little effect on the political climate in Kyrgyzstan. However, the Republic’s press was permitted to adopt a more liberal stance and to establish a new publication, Literaturny Kirghizstan, by the Union of Writers. Unofficial political groups were forbidden, but several groups that emerged in 1989 to deal with the acute housing crisis were permitted to function.

The early 1990s brought measurable change to Kyrgyzstan. By then, the Kyrgyzstan Democratic Movement (KDM) had developed into a significant political force with support in Parliament. In an upset victory, Askar Akayev, the liberal President of the Kyrgyz Academy of Sciences, was elected to the Presidency in October 1990. The following January, Akayev introduced new government structures and appointed a new government comprised mainly of younger, reform-oriented politicians.

In December 1990, the Supreme Soviet voted to change the republic’s name to the Republic of Kyrgyzstan. (In 1993, it became the Kyrgyz Republic.) In February 1991, the name of the capital, Frunze, was changed back to its prerevolutionary name of Bishkek. Despite these aesthetic moves toward independence, economic realities seemed to work against secession from the Soviet Union. In a referendum on the preservation of the Soviet Union in March 1991, 88.7% of the voters approved the proposal to retain the Soviet Union as a "renewed federation."

On August 19, 1991, when the State Emergency Committee assumed power in Moscow, there was an attempt to depose Akayev in Kyrgyzstan. After the coup collapsed the following week, Akayev and Vice President German Kuznetsov announced their resignations from the Communist Party of the Soviet Union (CPSU), and the entire bureau and secretariat resigned. This was followed by the Supreme Soviet vote declaring independence from the Soviet Union on August 31, 1991.

In October 1991, Akayev ran unopposed and was elected president of the new independent Republic by direct ballot, receiving 95% of the votes cast. Together with the representatives of seven other Republics that same month, he signed the Treaty of the New Economic Community. Finally, on December 21, 1991, Kyrgyzstan joined with the other four Central Asian Republics to formally enter the new Commonwealth of Independent States. In 1992, Kyrgyzstan joined the UN and the CSCE.

The "Tulip Revolution," after the parliamentary elections in March 2005, forced President Akayev’s resignation on April 4, 2005. Opposition leaders formed a coalition and a new government was formed under President Kurmanbek Bakiyev and Prime Minister Feliks Kulov.

Political stability appears to be elusive, however, as various groups and factions allegedly linked to organized crime are jockeying for power. Three of the 75 members of Parliament elected in March 2005 were assassinated, and another member was assassinated on 10 May 2006 shortly after winning his murdered brother’s seat in a by-election. All four are reputed to have been directly involved in major illegal business ventures.

Current concerns in Kyrgyzstan include: privatization of state-owned enterprises, expansion of democracy and political freedoms, inter-ethnic relations, and terrorism.